Former 9News storyteller Kevin Torres – who may or may not have been fired for a traffic citation that occurred in a station-owned vehicle – has landed a try-out with Fox31, according to The Denver Post’s Joanne Ostrow. From Torres’ Facebook page:

EXCITING NEWS to share: I will be staying in Colorado and joining the amazing news team over at FOX31 and Colorado’s Own Channel 2! To say I’m ecstatic would be an understatement. FOX31 was just named ‘Best Newscast’ by the Colorado Broadcasters Association this past weekend. The legacy both stations hold in this market can’t be matched.

So it turns out there may be a sports anchor worse than Drew Soicher – San Antonio’s Cory Smith. 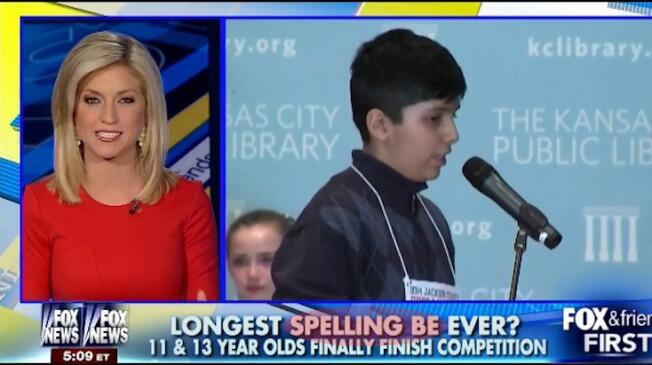 Which is tougher – A snow plow or a road-side reporter? Slide ahead to the 0:45 mark to find out.

Wouldn’t you be more likely to watch the NBC Nightly News with Brian Williams if this showed up every once in a while?

I wish NBC News’ Andrea Mitchell had resigned on the spot rather than make this one of the defining moments of her career:

The definitive list of the best news bloopers of 2013 (hat tip to Brad Bawmann).

Bravo to 9News anchor Kyle Clark, whose demand for better snow pictures has made it all the way to CNN.

Seriously, KTVU. The name “Ho Lee Fuk” didn’t set off an alarm bell? Even after it followed “Sum Ting Wong?”

A month after its news-sharing partnership deal with 9News ended, The Denver Post has inked a similar deal with 7News. Joanne Ostrow has the details.

The greatest fear of all television anchors: the teleprompter dies mid-broadcast.

Fox31 and reporter Hendrik Sybrandy may be playing a little defense after 9News fact-checked a recent Fox31 story about an Italian gun manufacturer executive being mistaken for a terrorist and determined the whole thing was a “hoax.”

UPDATE: Fox31 has pulled the online version of its story, but not made any statement about why or offered a correction.

In his inaugural (and likely farewell) broadcast, KYFR anchor A.J. Clemente learns that the old adage “Treat every mic as if it is live” is a pretty good one:

From Denver’s own Channel 7:

“It was a regrettable and embarrassing error. We are mortified this appeared during our 5 p.m. news broadcast. The editor pulled the image of the book cover from the Internet without realizing it had been doctored. We sincerely regret the error and have corrected the story to prevent any recurrence of its broadcast. We are following up internally as well, to avoid a repeat of this inexcusable oversight.”

Poynter examines how the agreement among Denver TV news stations to pool interviews has affected coverage of events such as the Aurora theater shooting.

Maybe if Kathy Sabine’s forecasts were right more often, she’d get letters like this instead of blogs like this.

Just because you are wearing ear protection doesn’t mean your microphone is.

If you listen to the smart guys, they say (the future of local TV news is) not very bright. There will always be local news, but the face of it is going to change. I don’t think you’re going to see people like me anymore, people who spend 35 years in one market. You’re going to see a lot more young people with shorter deals, more turnover. I’m a survivor. People ask me what I’ve accomplished and I say, “I survived.”

Well, it’s official: We have found rock-bottom for local TV news. The Independent News Network has created “local news in a box” for small markets such as Davenport, Iowa, and Montgomery, Alabama.

You know it’s going to be a “Great Moment in Journalism” when a CBS affiliate’s “I-Team” investigator has to turn his sights on his own station’s morning news show.

How many cockroaches does it take to freak out a weatherman meteorologist? Just one.

Joanne Ostrow at the Denver Post has seen the future of Denver television news, and it does not include co-anchors such as Karen Leigh, Libby Weaver and Mark Koebrich. Instead, expect more of the 20-20-20 rule: “Hire 20-year-olds, pay them $20,000 a year and have them work 20-hour days.”

Ahhhh, Russia. It is so quaint how you are always 30 60 years behind us. If you were watching cable news here in the states on Monday morning, it was nearly impossible to avoid updates on the Moscow subway bombing. In Russia, not so much. As the New York Times reported, “Channel 1, a main government station, reported briefly on the attacks at 8:30 a.m., a half-hour after the first blast, but did not mention them again until noon.”

The rumors have been circulating for a little while that CBS4 lead anchor Karen Leigh is pregnant, so I’ve been curious if there would be any backlash to the fact that she is not married. Most people wouldn’t care, of course, but TV news viewership tends to skew a little old and cranky.

But so far, there hasn’t been much noise. And credit Leigh for getting ahead of the story with this blog post. She smartly humanized her situation in a way that should take the air out of those who might criticize her.

If you are like me, you want a little ‘Roid Rage mixed in with your weather. Time to step your game up, Kathy Sabine.

Congratulations to reporter Tony Kovaleski, producer Arthur Kane and the rest of the team at KMGH/Channel 7 for winning the Alfred I. duPont-Columbia University award for its half-hour report on the December 2008 Continental airlines crash at DIA. Michael Roberts at Westword has the details.

Good news if you are a fan of business reporting. The rumors swirling the past week that former 9News business reporter Gregg Moss would return to the Denver NBC affiliate have proved true, but with a twist. The Denver Business Journal reports Moss will return to 9News in a part-time role, while continuing to work as a business strategy consultant for the company that previously had lured him away, Alem International Management. Over the past decade, Moss has bounced between 9News and positions with the Fort Worth Business Press, Wiesner Publishing and Alem.

Congratulations to CBS4, which posted its first 10 p.m. newscast ratings win in years. 9News GM Mark Cornetta blamed his station’s second-place performance on “re-runs, specials and football (that) tend to skew the ratings results at this time of year,” but we all know that the real reason CBS4 landed in first place is because of Misty Montano’s twitter presence.

When preschoolers across the country tune in to ABC tonight to watch “A Charlie Brown Christmas,” they may wonder why Franklin is getting all the air time. Imagine their disappointment when they finally realize that President Obama’s prime-time address on the war in Afghanistan has bumped the Charlie Brown tradition until next week. But not everyone is happy about the scheduling conflict.

A digital billboard that combines an ad for the WPMI-TV news team with the station’s live Twitter feed goes bad.

If you are at work, you’ll want to turn your speakers down for this one. And check out the female co-anchor’s eyes after he utters the magic phrase.

Joanne Ostrow at the Denver Post gives KMGH/Channel 7 anchor Anne Trujillo the kiss of death by writing a congratulatory 25th anniversary article. In this devolving media environment, 25 is about the average age of anchors, not the length of time they’ve been at your station.

If you spent any time in the Bay Area during the good old bubble days, you probably remember Sasha Foo from KPIX-TV. She’s since landed in San Diego, where she anchors the local evening news and insults child skateboarders.

This “Great Moment in Journalism” is brought to you by Genevieve Miller and Denver Center Attractions.

This is what happens when you replace every seasoned reporter you have with inexpensive 22-year-olds who may or may not be experiencing ‘roid rage.

Pew Research Center has released a new study that shows that the Internet has passed newspapers as a primary source of news. Both still lag television, however. Details of the study are here. Incidentally, my own survey has found that 100 percent of Pew executives think it is a waste of money to hire a graphic designer to make graphs look better than something you could create in Microsoft Excel.

It looks like your grandfather is more average than you thought.